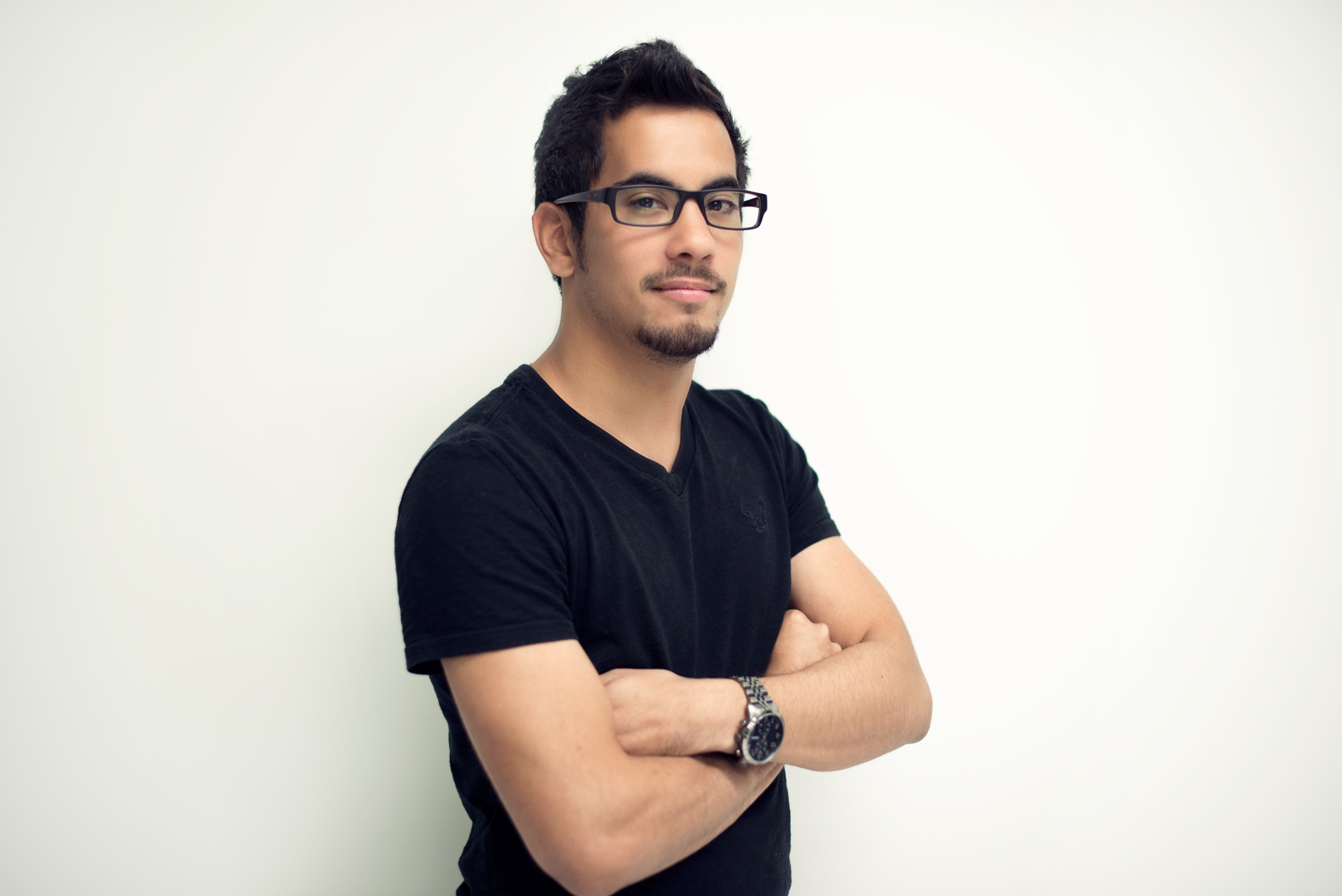 Gaudy starts the day slowly, after snoozing his alarm six times. When he does get up, he feeds his yorkie “Taco” and takes him outside where he marks his territory four times around the yard. Once he gets back inside and changes, he does the one-two check for his wallet and phone in his pants and runs to the car…for cardio purposes. Cranking his Bluetooth to depict his morning mood and taking all the shortcuts he knows to get to work, gets him prepped for the day ahead.

At work, he likes to start his co-workers off with a few puns, which don’t always make others laugh. But he’s not so concerned as long as he’s laughing. Opening up website inspiration sites and blogs helps him get in the zone to start the day off in the right mood. Since he doesn’t drink coffee, he gets some more cardio by walking across the office for water. After reading a couple blog posts, he’s ready for the day—working on custom projects and chewing through emails.

Gaudy is definitely picky about his workspace. He needs all of his figurines at the top of his desk separator. It may sound childish, but they give him inspiration and motivation, while looking badass at the same time.

He is the Senior UI/UX and Template Designer at LinkNow media, and so his tasks throughout the day include:

All in all, it’s a whole lot of planning to ensure that everything can be presented perfectly for the developers to understand and apply his ideas.

The only thing that can ruin his day is if other people are in bad moods. A serious quiet office isn’t the best environment for him to get work done!

For the past eight years, Gaudy has been playing foosball with colleagues. Some say he should be a pro foosball player! Thirty minutes per day for eight years really adds up. Though occasionally he will skip breaks if he needs to make up for lost time, participate in meetings, or meet tight deadlines. In his opinion though, breaks are important to help break up the day so he can keep his focus.

His favorite thing about the people he works with is their sense of humor and willingness to learn new things. They all bounce ideas off each other and get batter as a group rather than keeping to themselves. It’s easy to smile and laugh with his LinkNow team!

The main aspect that keeps his job exciting is the fact that every project received is a new challenge. The industry changes on a frequent basis allowing him to think outside of the box and try new functionalities, design elements, etc.

And of course, the people he works with also keep him coming back for now eight years—they’re down to earth and know how to balance fun and work.

Finally, Gaudy would like to thank all of his sponsors for supporting him—if he had any. No really. Anyone up for the task?

In reality, he’d like to thank management for producing such a great work environment for the employees at LinkNow. It’s definitely a work environment that cannot be replicated anywhere else. Keep on rockin’ in the free world!

Gaudy’s three keys for success as a Designer:

There are currently no comments for A Day in the Life of: Gaudy Perignon Senior UI/UX and Template Designer [Series Post #7].